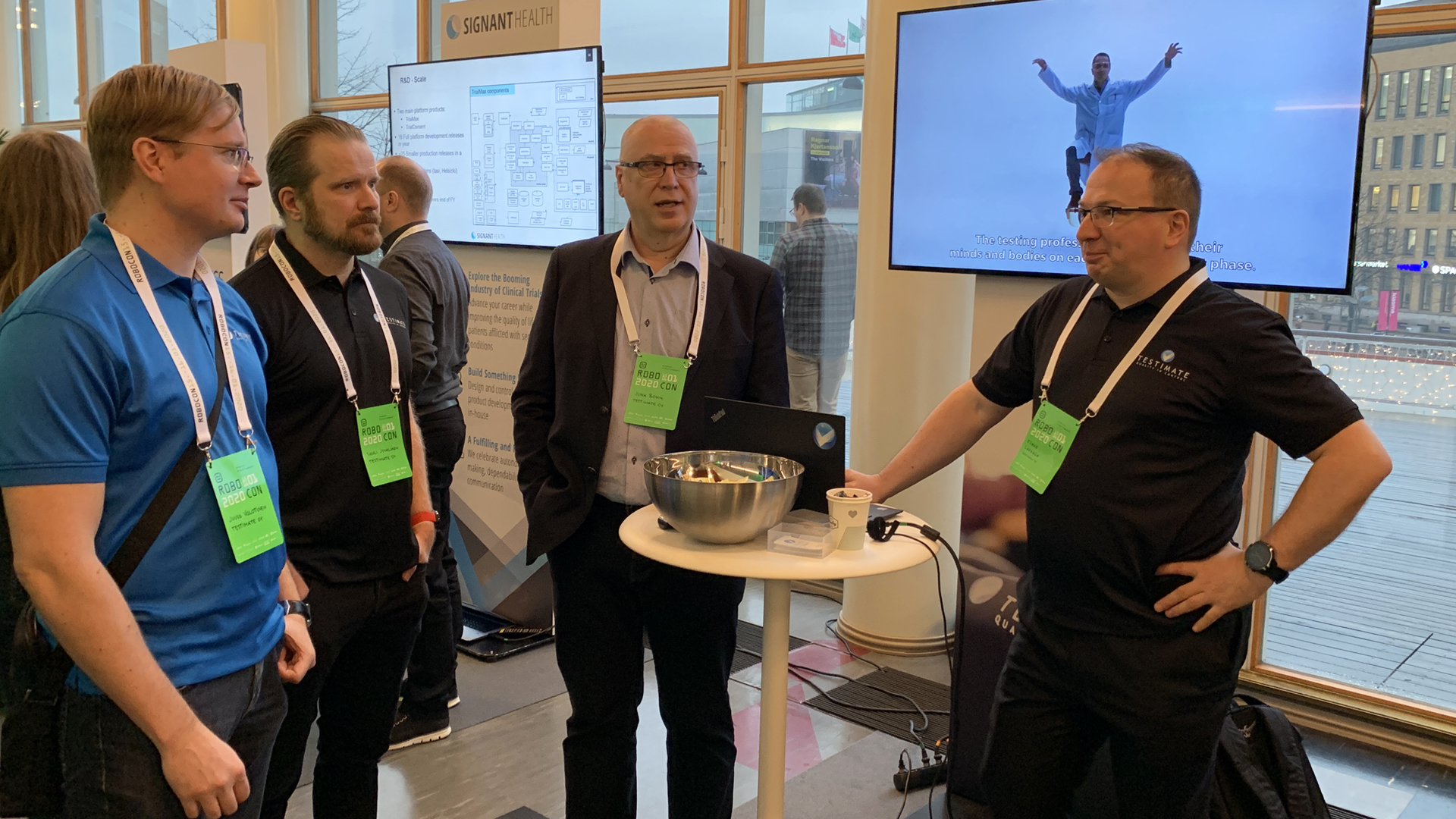 What was Robocon 2020 like? In this post, two Robocon newbies share their insights on the event, presentations and the community that surrounds the Robot Framework test automation tool.

Testimate is a member of the Robot Framework Foundation and a regular Robocon attendee. This year was no exception as several Testimate testing consultants participated in the event held in Helsinki, Finland. Our participants included two Robocon newbies, Juha Bohm and Nadja Mikkilä. What did the newbies think of the annual event?

Robot Framework meets many use cases

So, this was my first Robocon. It was really interesting to see the various ways in which Robot Framework is used for testing. The use case presentations really revealed the creative approaches that testers have taken.

For example, in the method presented by Aleksi Lukkarila, Robot Framework was used to test the Yousican music app. While software robots are often used for testing user interfaces, for example, Yousican used automation to test the accuracy of musical notes. It was really interesting to see that you can test sound and tunes to great precision!

Another fascinating case was presented by Maria Prokhorova who works at XOOOX Games. The company develops physical slot machines that feature a lot of graphics and animation from playing card and credit balance animations to parrots and pirate flags flying at the background. To facilitate testing, Maria has developed her own Image Library tool for testing individual images and animations. What’s best, the tool was shared to the Robot Framework community for use and further development!

As I have been in the IT industry for a couple of decades already, I looked at Robocon from a senior professional’s point of view. This was my first Robocon, however, and the event left me with a really positive overall experience.

However, some presentations and event participants gave me the impression that Robot Framework had been applied as a solution to each and every problem – even problems with which some other solution could have been less complex to work with.

In my experience, having wide knowledge of various alternative tools and solutions is a definite asset. You do not have to re-invent the wheel, so to speak. The profession is taking leaps forward, that’s for sure, but often people with years of experience can point to the right direction and help identify the best solutions in different cases.

All that aside, Robot Framework is a really useful tool. It was especially thrilling to see a presentation on optimizing the number of tests without compromising quality by using automation to identify critical components that have dependencies with other components. This is an old problem that has been traditionally solved by manually maintaining so-called dependency lists. In this case, automation provided an elegant solution to an old problem.

It’s all about the community

As a Robocon newbie, I was really positively struck by the community spirit at the event. I naturally knew that Robot Framework is an open source tool, but the event really showed how information and best practices are shared within the community. All this also paves way for the tool’s constant development.

The community spirit could be seen in almost each and every presentation. For example, Rene Röhner from Germany shared how he fell in love with open source. He developed the DataDriver library with help from the community. Afterwards, the community has applauded his work and further developed the library.

If you are interested in your own personal development and networking with the Robot Framework community, we warmly recommend attending Robocon.

Do you want to be part of Testimate’s team? Want us to make Robot Framework part of your skillset? See our contact details and get in touch today!